Rotersand is a friend who has been accompanying you for almost two decades on your nocturnal hunt's Post-Industrial amusement. Rotersand is the beast right beside you - twitching, stomping, finally leaping upon you and clinging to you. Want to take us home?
The beast can also purr like a black cat if it wishes. The beauty and the beast: an insuperable antagonism? In Rotersand both melt into one with complex elegance.
The new 2020 album´s title "How do you feel today?" is so much more than a question asked in polite small-talk. It's pure social dynamite in a world where emotions become moods and moods suddenly turn into opinions and uncorrectable creeds. Truth is not holding on to facts anymore. Truth is truly becoming fanatic.
Founded back in 2002 as Germany's most exciting futurepop act, duo Rotersand quickly rose to
become the most intelligent and important German electro export in a mere couple of years and with a little help by a number of breathtaking records. Never did they leave their heart out of sight in their machinery, ever did they remain critical observants of our time - always questioning, always doubting, always resisting. Their latest album "How do you feel today" is a climax of all this, both an essential status quo of our civilisation and a profoundly biting piece of social criticism. Never holier-than-thou, never with an imperative. But with a weapon that's seemingly the only one able to melt the ice around our hearts and pierce through the brutalisation of our days: Huge, sublime music. Electronic anthems for humanity.
The more transparent we became, the more egocentric we staged ourselves in these networks that
we allowed to become more and more anti-social. A project capturing this zeitgeist, this feverish
atmosphere of a digitally corroding world in its music while at the same time asking the right, the
important questions, Rotersand are aware of that. The ones familiar with this band already know that Rotersand are not exactly famous for taking their concepts anything else but serious. Be it
abandoning individuality in favour of a greedy system ("Random is Resistance") or the destruction of personality by an addiction to capitalism and communication ("Capitalism TM"): Rotersand are
inclined to the avantgarde not only musically. Thus, also on "How do you feel today" they write the
soundtrack of the world, of the the reality they perceive - the breaking of the civilisatory crust and the grinding sound of brutalisation. Rotersand stir us up with striking, virtuously staged, impeccably produced, admirably arranged, post-modern electro anthems fuelled by a surging energy, feeling and a profound anger, entreating us not to bury empathy and humanity, not to confuse truth and lies.
Never before has this project been that political. That urging.
We live in dark times in which even the most essential values seem to evaporate in the blink of an
eye, becoming cue ball to spontaneous moods. But a record like "How do you feel to today" can be
the beacon in this darkness. Nobody comes close to Rotersand when it comes to electronic music
anyway. Now at the latest, however, they should become an official national treasure.
"How do you feel today" is so much more than a profane question. It's the safety buoy keeping us
from drowning in the raging waves of modern times' information overload. 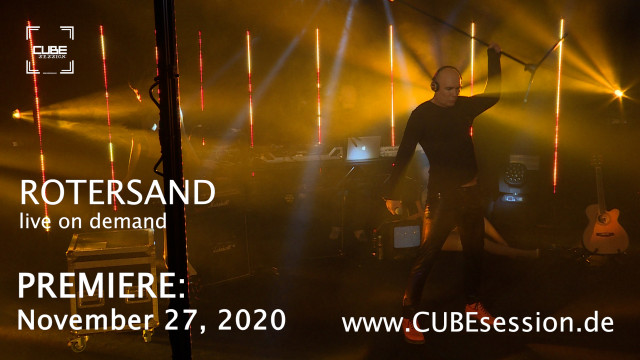 The CUBEsession from Rotersand is online! We wish a great concert.

On November 27th, 2020 ROTERSAND will end the first season of the CUBE session.

Concert summer in the district

We are happy to announce, that Rotersand are going to perform live on 02 October 2020 at the Revierpark...