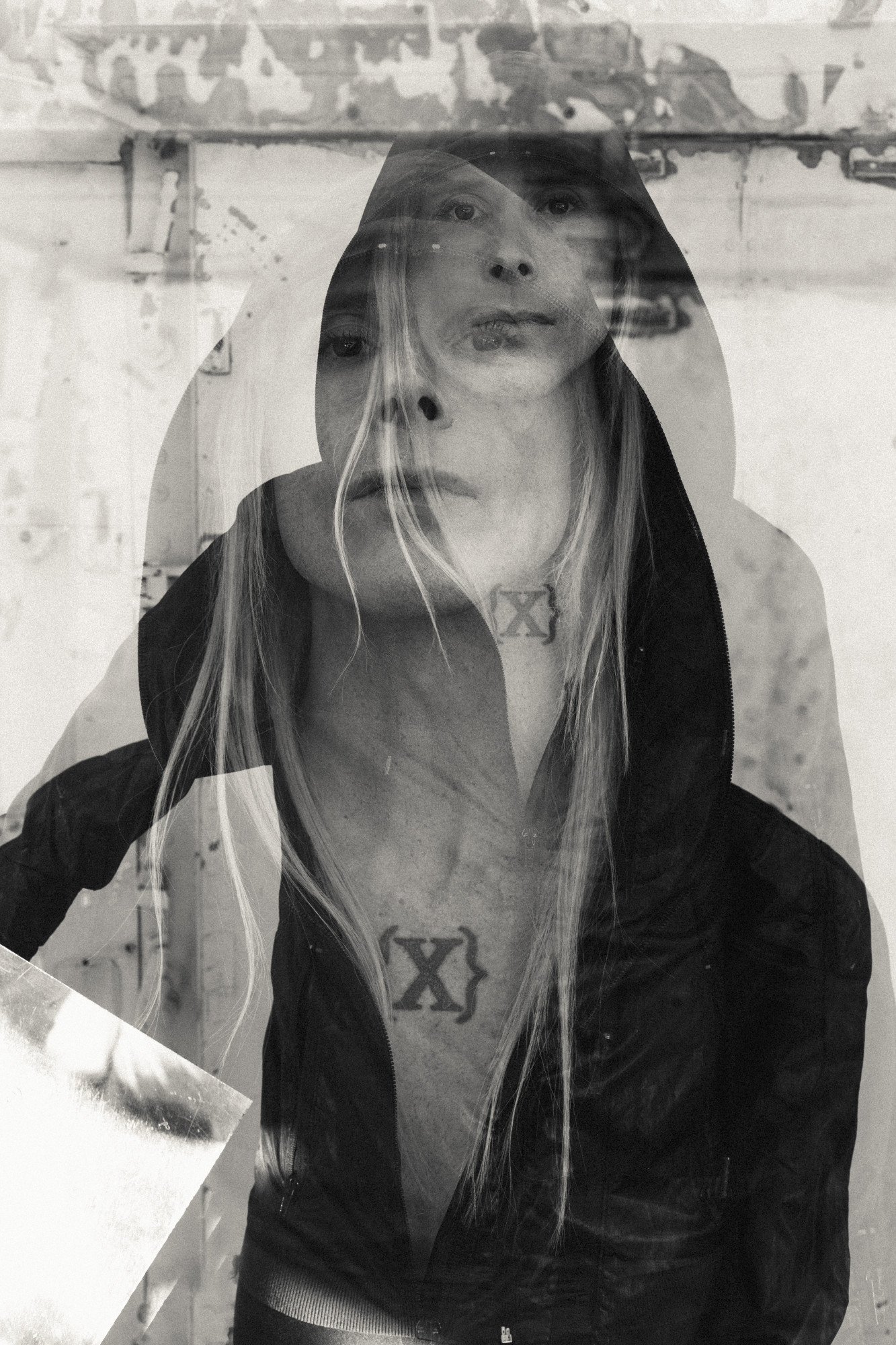 Give Me The Stage, God Knows My Life Needs Staging
Transformation is at the core of Chris Corner's music and outlook. Ever since leaving wildly successful
trip-hop group Sneaker Pimps, Corner's process of becoming IAMX beginning in 2004 has been
theatrical, transcendent, and communal. Androgynous and visceral, IAMX has metamorphosed from
small-town blue-collar kid to international pop star in the late 1990's to creator of raw art that disrupts
gender and genre in the 2000's. Fuelling electronic experimentation with punk energy and confessional
lyricism, Corner's dark alternative electronic sound, fashion, performances, videos, and persona are
larger than life, iconoclastic, and shockingly intimate.
I Forget That There's A World Outside
Growing up as a self-described socially anxious geek, Corner's interest in music was stoked by a "weird
uncle" who would play "strange music" to him. Interest became obsession, and obsession a means
through which Corner explored his growing fascination with technology. The interest lingers to this day,
as IAMX not only writes and performs, but also produces his own music. The awkward kid who spent a
lot of time in his room became the iconoclastic artist who recently spent weeks in a converted
homestead in the mojave desert staring at mountains, mining the silence around him, fastidiously
regenerating the muscle memory in his fingers, and practising, and honing his new album, Echo Echo.

I've Seen Attention - See Through Me
Corner's adolescent curiosity moved to a new level in his teens when he connected with his older
sister's boyfriend Liam Howe, who became a friend and collaborator. Their first band F.R.I.S.K. released
two bedroom-produced EPs - Soul of Indiscretion, World as a Cone - that provided an early sonic
template for trip-hop in general. The pair also performed as DJs under the alias Line of Flight. In 1995,
Corner and Howe formed Sneaker Pimps in Hartlepool, England with support from Kelli Dayton (vocals),
Joe Wilson (bass) and Dave Westlake (drums). The newly formed band took rave culture and the pop
charts by storm with their 1996 debut album, Becoming X which featured dancefloor classics "6
Underground" and "Spin Spin Sugar", sold over a million copies, led to extensive touring, and attracted
the attention of Virgin Records who signed them.

There's Something That's Stirring Deep In Me
In 1998 the band's changing creative direction led to Corner taking over vocals from Kelli, and Splinter
was released on Clean Up records in 1999. Splinter fostered a bourgeoning cult fandom, who continued
with Sneaker Pimps through the band's third album Bloodsport (Tommy Boy) and beyond. Soon, Chris
realised the band was no longer the right vehicle for where his music was headed, and from this
awareness IAMX was born.

I Know You're Aching To Be Saved
Even though some of the songs on IAMX's 2004 debut Kiss + Swallow were originally slated to be on the
Sneaker Pimps' fourth album, (and IAMX is itself a reference to Becoming X), shades of Chris' old life
quickly faded as his theatrical and gender-bending alias emerged with full force. From 2004 onward,
IAMX maintained a hectic recording and touring schedule, moving to Berlin in 2005 at the peak of its
electronic renaissance. IAMX released his sophomore album, The Alternative in 2006, followed in 2008
by Live In Warsaw. Kingdom Of Welcome Addiction and its anagram remix album Dogmatic Infidel
Comedown OK followed in 2009 and 2010, chronicling a dark phase in Corner's life. As dark energy
seductively does, it produced compelling work, including 2011's Volatile Times and 2013's The Unified
Field albums, the latter of which is considered a milestone in IAMX's creative development as a
musician and performer. Eventually, however, dark energy claims its toll.

The World Outside May Still Be Beautiful - But I Love This Cell
Following a successful world tour in support of The Unified Field, Corner fell into a depressive and
insomniac state. His ordeals - detailed in his personal blog here - prompted him to move to Los Angeles
in sunny California for a change of scenery. "I stopped listening to music for about a year. I stopped
making music and it was almost unbearable to listen to music. For instance, I couldn't watch TV, I
couldn't even drive as it would invoke these waves of existential panic, depression, and exhaustion. I
thought I would never be able to make music again but that my enjoyment of it was over. That was a
very scary idea," he explained.

In The Sunlight And The Dust Of California
The move was a good decision and yielded one of IAMX's best albums, Metanoia in 2015 and the
mini-album Everything Is Burning (Metanoia Addendum) in 2016. Having poured his heart out lyrically
on two successful albums and rigorous world tours, IAMX released Unfall (German for accident), an
instrumental album to cleanse his creative palette. In 2017, Corner emerged from his depression into a
state of euphoria captured on his album Alive In New Light.

The Boys With Their Toys Are Bringing The Void Our Way
In addition to his success as a songwriter, producer, and touring artist, IAMX is one of the most licensed
musicians on ABC TV's runaway hit show, How To Get Away With Murder. By the beginning of 2019,
IAMX had synced 16 of his songs to its soundtrack, becoming one of the most recognisable composers
on television thanks to the show's creator Pete Nowalk being a superfan of IAMX. Another superfan
turned collaborator is postmodern tattoo and makeup powerhouse, kindred spirit Kat Von D, who sang
on four songs on Alive In New Light and shares IAMX's avant-garde fashion and design sense, epic stage
theatricality, and gender-bending proclivities. IAMX's provocative aesthetics are not limited to his music
and fashion. As a video artist, he crafts IAMX's stunning live visuals and most of their music videos, as
well as videos for other acts, most notably his close friend Gary Numan.

Echoes From The Past
In the decompression from the electro-fuelled passion that had taken IAMX to 27 countries on the Alive
In New Light chapter, an old yearning reawakened. 2019 was to be the year that IAMX returned to the
device that had been the initiation of his odyssey as a musician. The acoustic guitar. Eleven acoustic
re-imaginings of IAMX's extensive catalogue, Echo Echo heralds the start of a new yet familiar tangent
in the enthralling IAMX journey, one which promises the intimacy of his songwriting laid bare.

The Sky Has Opened Up And Now I'm Overcome
IAMX isn't clear where this newfound liberation will lead him. Rising from a humble working class
background to capitalistic celebrity, then down to the depths of despair and back into a new light,
IAMX's armour is now more permeable and his imagination more stimulated by Los Angeles'
unrelenting optimism. 2021 saw the release of Squaring The Circle, the first Sneaker Pimps album since
2002's Bloodsport, as well as the experimental live project, Machinate as IAMX, and the beginnings of
IAMX's own record label and production company, UNFALL. For Chris Corner, turned IAMX, the
transformative journey that began in his bedroom as a young kid in the North East of England and
found its way into the California desert continues. The I AM in IAMX may imply stasis, a fixed state of
being, but the X signifies the variable in mathematics and an unstoppable metamorphosis. IAMX will
continue to evolve and is fiercely committed to deliver music that transcends genre, defies the rules of
the music industry and cuts straight to the heart.